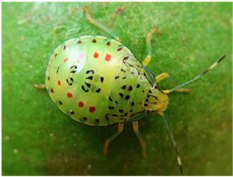 Chitin is a compound that makes up the main component of the exoskeleton of insects.

Chitosan is a compound that is created from the breakdown of chitin.

Chitinase is the naturally occurring enzyme that breaks chitin down into chitosan.

These worm castings contain enzymes known as various forms of chitinase of which insects have a strong aversion.

The worm castings also have the ability to activate multiplication of the chitinase-producing bacteria found naturally in plants.

It was observed that ants refuse to cross a layer of worm castings.

It has been found that worm castings can be used effectively to repel insects that feed on the internal liquid or nectar of various plants.

These include a large array of insect pests including white fly, aphids, spider mites, fruit flies, and other nectar-sucking insects.

When worm castings are put into the soil of the plant feeding area (stem to drip line), the evidence indicates that the worm castings activate an increase in the internal concentration of chitinase.

The level of chitinase in the nectar of leaves before treatment with worm castings is low.

When the chitinase concentration is low, insects are not repelled.

The time to increase the level of chitinase in a large plant such as a full grown hibiscus can take several months and trees will take longer.

The pollination nectar and pollen do not appear to get an increased level of chitinase producing organisms with the use of worm castings.

Worm castings were applied in a ½ inch layer from the stems to the drip line.

In about two months all white fly residue and cocoons were gone.

White flies from neighbouring plants, which had not been treated, would fly around the treated leaves but not land on these leaves.

An excerpt from the document “Benefits of Vermicast in point form” to read the full article, see our commercial documents section, otherwise